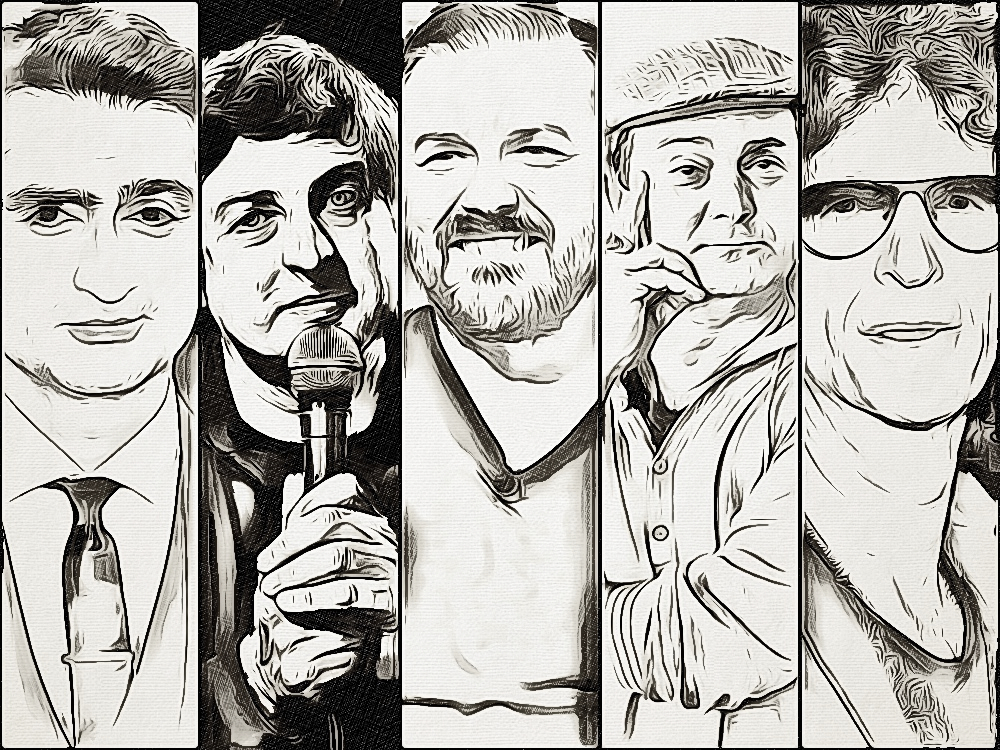 Last week the comedy world was shattered by a tragic loss, with the death of Brody Stevens. This week’s biggest story is all about healing. The story that dominated comedy news this week was the JFL takeover of SiriusXM Canada’s “Canada Laughs” channel. You can read all about that here. This week we also talked about John Mulaney returning to host Saturday Night Live, Arrested Development is returning with the second half of season five, SXSW announced some of their comedy lineup, and the KAABOO Texas festival announced their comedy stage performers too. Lena Dunham showed some body positivity while Pete Davidson worked on mental positivity in South Orange NJ, Amy Schumer released a trailer for her new Netflix Special, and we previewed the inaugural Black Women in Comedy Festival.

But there’s a lot more we didn’t tell you about- stories that we call bits- just a little bit of news not quite enough for a whole story, and we saved those up to share today.

A documentary about Eugene Mirman‘s comedy festival will debut at SXSW this year. “It Started as a a Joke” chronicles the decade-long run of the Eugene Mirman Comedy Festival – including a final farewell show. The film celebrates Eugene’s unique brand of humor and his role in the alternative comedy movement, offers a bittersweet goodbye to an era, and reminds us of the healing properties of comedy – even in the most challenging of life’s circumstances. Michael Ian Black, Kristen Schaal, Wyatt Cenac, Ira Glass, John Hodgman, Kumail Nanjiani, Reggie Watts, Michael Showalter, Janeane Garofalo, Jim Gaffigan, Jon Glaser, Mike Birbiglia, Bobcat Goldthwait all appear in the doc.

Tropic Thunder writer Etan Cohen is writing the script for Brothers a comedy movie that will star Josh Brolin and Peter Dinklage. Of course the first thing we’re all thinking is- is this an update on the Devito/Schwarzenegger hit comedy Twins?  We don’t know – the storyline is being closely guarded.  Legendary Entertainment won the bidding  and landed the project. Source: THR

Adam McKay has a spy comedy in the works with frequent partner Will Ferrell.  Kumail Nanjiani will star in the project titled “No Glory” which is based on National Security Operative and author Scott Shephard’s real life.  The Rambunctious Patriotism and World-Wide Shenanigans of a First Generation American in the Clandestine Service of a Grateful and Mostly Unwitting Nation is the subtitle of sorts and should tell you most of what you want to know about the project. Source: Variety

SiriusXM’s Howard Stern channel, which is the only satellite radio show that includes video, is now available on Amazon Fire TV making this the first time you can watch the Howard Stern show daily since he stopped broadcasting on E! Also if you want to watch Howard and Robin attempt to replace Bradley Cooper and Lady Gaga singing shallow, you can click here. Source: Inquistr

Canadian record company 604 Records says they have been inspired by Just For Laugh’s decision to make a commitment to local comedy on SiriusXM’s new Just for Laughs Canada channel. The Vancouver based company says they want to step up to the plate, expanding their ‘Comedy Here Often?’ YouTube channel to include third party content from many independent comedians in Canada with fair revenue splits. They will also be introducing a ‘Comedy Here Often?’ podcast series that will be broadcast out of the 604 Studios in Vancouver. The first podcast will be live streamed on March 7, 2019 at 5pm PST via their Facebook and YouTube channels and subsequently distributed on all podcast platforms. It will feature comedy producer Kevin “Kevvy” Maher, comedians Erica Sigurdson and Kevin Banner, and President of 604 Records, Jonathan Simkin.

Lisa Whelchel who 80’s nostalgia lovers will remember as Blair from Facts of Life is coming to MeTV to host an unscripted reality series called “Collectors Call” about people who have amassed gigantic collections of pop culture memorabilia.  Coca-Cola, Wizard of Oz, rare Harry Potter books, Presidential locks of hair will all get appraisals, and be offered the chance to make trades of a prized item from their collection for a new rare artifact. It all starts April 7, at 10pm, but before the premiere Lisa will host a special three-hour MeTV television event to celebrate the 40th Anniversary of The Facts of Life with Lisa’s five favorite episodes and her personal stories after starring in the series.

A new Scooby Doo is in the works. The theatrical release will be animated, not live action following up on 2004’s Scooby-Doo 2: Monsters Unleashed. Tracy Morgan is going to voice beloved character Captain Caveman, and  Will Forte will voice Shaggy, while comedian and Jane the Virgin star Gina Rodriguez is set to play Velma. Frank Welker will continue to voice title character Scooby Doo.  The film is scheduled for release in May 2020. Source: THR

This week, everyone’s looking forward to the debut of Ricky Gervais‘ latest, After Life, on Netflix.  We’ve seen it and we’re hooked. It’s a really good show.  But don’t expect to be LMFAOing your way through this one.  It’s a comedy, but more like Louie was a comedy. There is cleverness and moments that make you think- oh that’s really funny, but you won’t be escaping from the sadness of life here. This one’s a bit of a downer. But its our favorite Gervais series in years, and welcomes back Gervais’ Extras costar Ashley Jensen in a supporting role. We meet Gervais’ character Tony soon after his beloved wife Lisa has died of cancer.  Lisa and Tony loved life- thrilled at pranking each other, enjoying every moment. We see these glimpses of Tony’s “before” life through a video Lisa has made for him to watch after she’s gone.  But now his life is joyless. He eats cereal with water in a paper cup because there’s no milk, and no clean bowls.  And he doesn’t care.  He contemplates suicide routinely and is in search for a reason to live while getting through his job, visiting with his nearly catatonic elderly father and attempts to get through the day.  It’s lovely, its thoughtful, its beautiful and it is funny. After Life premieres this Friday on Netflix.

Kevin Pollak is finally too busy to podcast with the massive success of Marvelous Mrs. Maisal and other projects, so he is ending his highly popular podcast after ten great years.  Pamela Adlon and Jim Jefferies will be the guests on the final episode of Kevin Pollak’s Chat Show. It tapes today at Dynasty Typewriter in Los Angeles. Source:  All Access

Katherine Helmond died at the age of 89 this week. The sitcom veteran was best known to a younger to middle aged generation as Mona on Who’s the Boss? but many of us also remember her as Jessica Tate from Soap. She also guest starred and had recurring roles on so many sitcoms including Coach, Everybody Loves Raymond and Benson, Love Boat, The Bob Newhart Show and more.  She died of complications from Alzheimer’s disease. Source: Deadline

You remember when Doug Stanhope got mixed up in a feud between Johnny Depp and his ex Amber Heard? Depp just filed a $50 million dollar defamation lawsuit against Heard based on her accusations of domestic abuse.  If you recall Stanhope had rushed to Depp’s rescue at the time, writing that Heard’s allegations were bullshit. Source: E! Online

A few weeks ago we reported that the Comedy Cellar was toying with the idea of going phoneless after using Yondr bags for an Aziz Ansari show.  Since then the Cellar has been employing a lower tech creative approach to the phone problem- envelopes! The Cellar venues have been asking patrons to simply seal their phones in a mailing envelope upon entering the venue, which is a pretty clever way to help avoid the temptation to text, and a strong impediment to recording shows or taking photos.

Finally, New York City you have only two weeks left to catch Colin Quinn‘s Red State Blue State at the Minetta Lane Theater. Read our review here and get on it.