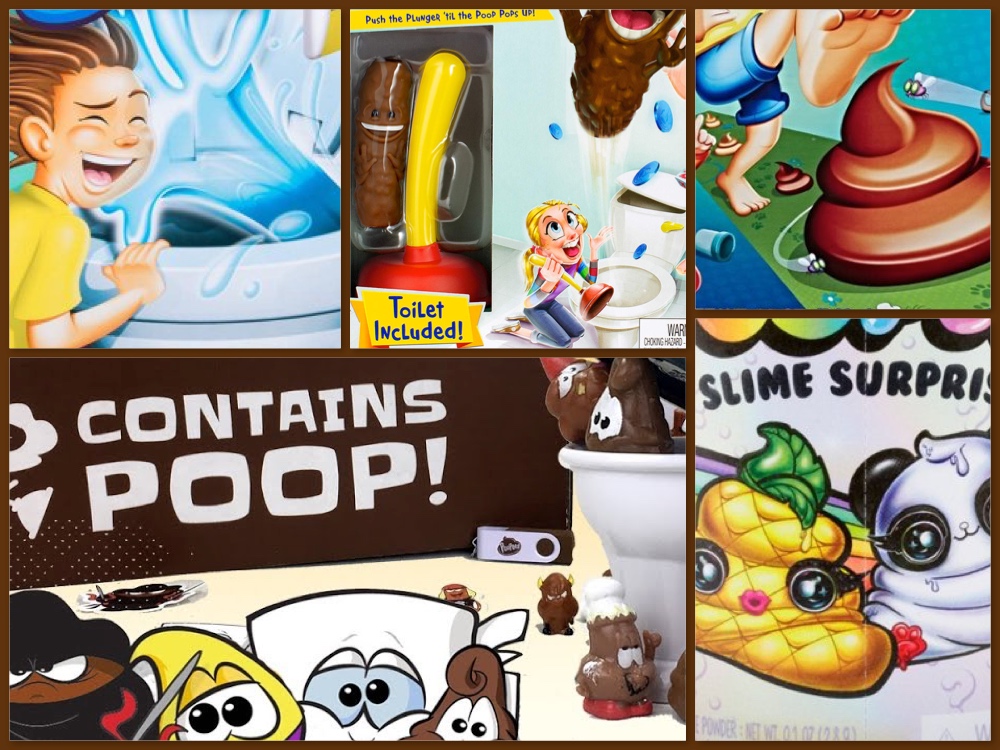 Just when we all thought that kids are spending all of their time on their phones and mobile devices and no longer playing with toys and games a new toy savior has arrived. Poop! That’s right if video games are number one then poop is definitely number two. Toy companies are going out of their way to get the potty started. Swear. These are the kinds of jokes that are all over these shitty toys.

Flushin’ Frenzy is the newest kids game that guarantees big laughs and big fun! The toilet is stopped up and you’re gonna take turns trying to unclog it. One good pump can pop the poop into the air! Be the one that grabs the poop and win points. Hopefully this one comes this one comes with a Purell wipe. By Mattel!

Looks like this one is based on a TV show! Collectible poops that are flushed from your toilet to live in a magical place called Kerplopolis. This helps small children that understanding that their turds are living beings with personalities. Also comes with a toy toilet that shoots the shit into the air. Weeeee!

Toilet Trouble is yet another game with explosive toilets! This time your child hangs his face over the plunger not knowing if the toilet water will explode in to their face or not. The kind of game that only a dom could invent.

This was the biggest sensation last Christmas a game that combines poop with something almost as magical- unicorns! Little girls have loved the idea of Unicorns for generations. Todays kids get to do what those girls never got the chance to do. Play with colorful Unicorn poop. They even can hang their poop from a key chain to
let the other kids at the club know what they are into.

Don’t Step In it

From Hasbro- this may the only game that could be fun. Kids are blindfolded and bare foot walk down a path loaded with poop and the goal is “Don’t Step In It.” It seems that the game’s fake poop is meant to replicate dog poop and not human poop but they don’t make it clear. Imagination, it’s the kids call.

The post Poop! It’s What Kids Are Playing With! appeared first on The Interrobang.