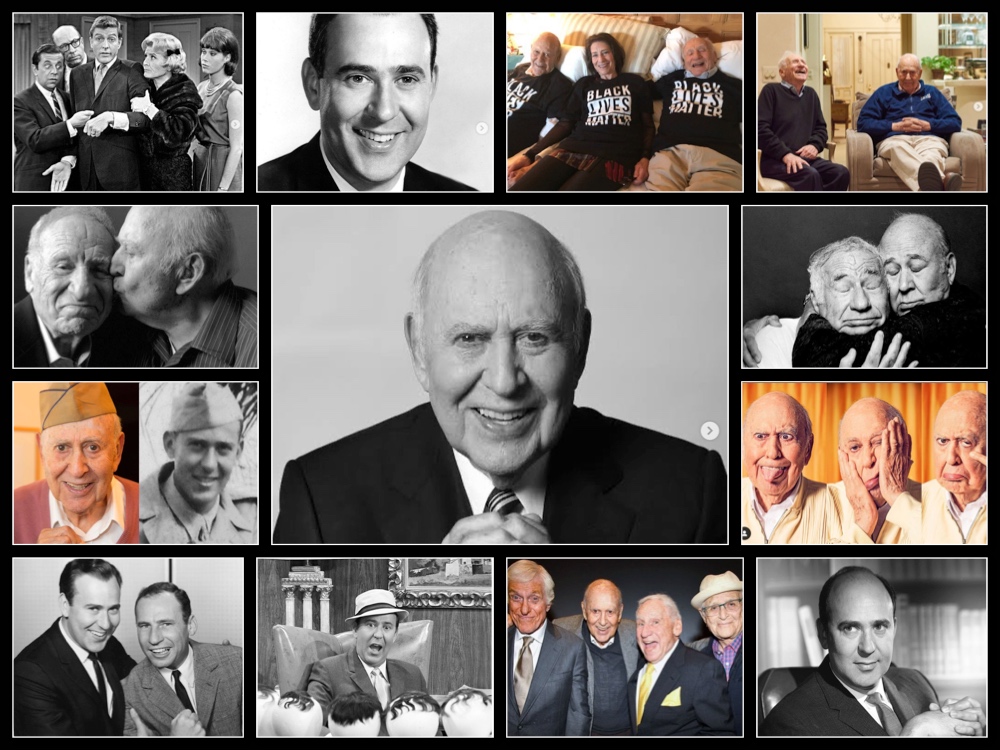 Carl Reiner, comedian, actor, director, and screenwriter, passed away yesterday at the age of 98.

Since 1950, Carl Reiner was a key player in American comedy on stage, TV and film. Performing double duty as a performer and a writer for Your Show Of Shows and Caesar’s Hour, Reiner played a crucial role in creating the American sketch comedy series as we know it. The writing staff reads like a comedy’s Murderer’s Row: Neil and Danny Simon, Larry Gelbart, Mel Tolkin, Aaron Ruben, Woody Allen and, Reiner’s best friend and collaborator for 70 years, Mel Brooks.

It was in the Your Show Of Shows writer’s room where Reiner and Brooks originally conceived The 2,000 Year Old Man. At first, they only perform the heavily improvised bit at parties, but it was so well received, that Reiner started recording the routines. After performing it on The Steve Allen Show, Allen encouraged the duo to release an album. 60 years, 5 albums and an animated special later, The 2,000 Year Old Man remains a timeless, seminal comedic piece.

Reiner’s experiences working with Sid Casear gave Reiner the premise for another comedy classic. Originally titled, Head Of The Family, it centered on the professional and personal life of a TV comedy writer. Reiner was originally slated to play Rob Petrie, but after seeing Dick Van Dyke’s performance in Bye Bye Birdie on Broadway, Reiner decided to center the show around Van Dyke. Going on producer Danny Thomas’ recommendation, Reiner picked 24 year old Mary Tyler Moore as Rob’s wife, Laura. Though he didn’t get the chance to play Rob Petrie, Reiner stayed on as the producer, writer and, had a recurring role as Alan Brady, which was largely based on Sid Caesar. Rebranded as The Dick Van Dyke Show, the show ran for five successful seasons, winning 15 Emmys and is now a pop culture touchstone.

With the success of The Dick Van Dyke Show, Reiner moved into directing, scoring a massive hit with Oh, God!, starring long time friend George Burns and written by another Casear alum, Larry Gelbart. Reiner was a key player in helping Steve Martin transition into movies, collaborating on four films: the breakout hit, The Jerk; the wildly inventive Dead Man Don’t Wear Plaid; the absurdist Sci-fi comedy, The Man With Two Brains, and the body swapping All Of Me.

Reiner never left acting behind, appearing on TV shows such as Two & A Half Men, and Parks & Recreation, Hot In Cleveland, and House, among others. He also made guest appearances on episodes that paid honored The Dick Van Dyke Show such as Mad About You (in which he played Alan Brady), and wrote an episode of The Cleveland Show entitled ‘Your Show Of Shows’, after the show that launched his career. He also played himself on The Larry Sanders Show and The Bernie Mac Show, both of whom proudly cited Reiner as a influence. At the age of 78, Carl Reiner was introduced to a new generation of movie fans when he played Saul Bloom, an elderly, but savvy con man in Steven Soderburgh’s Ocean’s Eleven series.

In addition to launching the careers of Mary Tyler Moore and Steve Martin as a bankable film star, and predicting Dick Van Dyke would be a giant star, Reiner recognized the incredible talents of a young Albert Brooks. Reiner discovered Brooks in his own living room, when a high school aged Brooks would come to the house to hang out with his friend Rob Reiner and performed an escape artist bit in Carl’s living room curtains. Brooks said Reiner was ‘like a second dad to me’;

Incredibly, Reiner never rested on his laurels. He kept acting and writing books well into his 90s. In 2017, he created and starred in an HBO documentary all about staying healthy and creative in your 90s.Produced by his good friend George Shapiro, it’s called If You’re Not in the Obit, Eat Breakfast and its streaming on HBO and HBO Max.

Carl also retained a constant presence on Twitter. His most recent Tweets – some posted less than a day before his passing – praised his wife and children, The Dick Van Dyke Show, his long time friend Mel Brooks, Noel Coward and trashed the President.

With a body of work spanning 70 years, Carl Reiner leaves behind a legacy that is nothing short of extraordinary.

Nothing pleases me more than knowing that I have lived the best life possible by having met & marrying the gifted Estelle (Stella) Lebost—who partnered with me in bringing Rob, Annie & Lucas Reiner into to this needy & evolving world.

Best thing a guy can do is to marry the right gal and, with her, spawn sons or daughters & watch them grow into good and caring people. Happy Father’s Day to all men who are lucky enough to be a loving father to loving children and a special thanks to the loving wives who bore those children! #happyfathersday #carlreiner #lovemyfamily #prouddad #family #love

My idol, Carl Reiner, wrote about the human comedy. He had a deeper understanding of the human condition, than I think even he was aware of. Kind, gentle, compassionate, empathetic and wise. His scripts were never just funny, they always had something to say about us.

R.I.P. Carl Reiner. Growing up Carl was like a second dad to me. He was the greatest. Not just as a comic legend but as a man. There was no one else this funny and this nice. I loved him.

I’ve known Carl Reiner my whole life and I can’t imagine a world without him. A loss for me, a loss for my family, a loss for all of us.

Goodbye to my greatest mentor in movies and in life. Thank you, dear Carl. https://t.co/H7A4ZwIqfc

It will take a while to process losing Carl Reiner because he’s been making me laugh since I was little. That’s some very funny processing helping leaven the sadness. Thank you, Carl. You done good.

One of the greatest moments of my life was sitting in Mel Brooks’s office as he called #CarlReiner in front of Billy Crystal and I and proceeded to wind him up for 30 minutes as they both made fun of my name and said it needed an extra consonant. pic.twitter.com/lGh9ux3cSi

CARL REINER DIES AT 98 – COMEDY LEGEND AND WWII VETERAN Comedy legend and WWII veteran Carl Reiner passed away today at the age of 98. Reiner was born in the Bronx on March 20, 1922, to Jewish immigrant parents. After graduating from Evander Childs High School, he went to work as a machinist's helper repairing sewing machines, a career he thought would become his future. — Reiner was drafted into the Army in 1943, and trained in the Signal Corps as a radio and teleprinter operator. But the night before he was to ship out overseas, a friend arranged for him to audition for the Special Services Entertainment Unit, and he was promptly transferred. For two years, he traveled around the Pacific theater performing for troops in Hawaii, Guam, Saipan, and Iwo Jima. His wartime experiences would go on to affect and influence the rest of his life. — After the war, Reiner performed Broadway musicals and television comedy and went on to have a decades-long career as a television and film director, including The Dick Van Dyke Show. Reiner famously formed a comedy duo with Mel Brooks in "2000 Year Old Man" and acted in films such as It's a Mad, Mad, Mad, Mad, World (1963), The Russians Are Coming, the Russians Are Coming (1966) and the Ocean's film series (2001–2007). — Carl Reiner was one of the most prolific entertainers in the history of show business, and his passing comes as a significant loss to the world. As a producer, director, and actor, he won 9 Emmys over seven decades and has more than 400 credits. — (Photo: Carl Reiner wears his WWII garrison cap and holds his original dog tags in this 2017 photograph.) — #wwiivhp #wwiiveteran #hollywood #carlreiner #veteran #usarmy #classichollywood #army #pacifictheater #melbrooks #film #emmys #dickvandykeshow #hollywoodgoldenage #military #soldier #iwojima #GIJews #jewish #remember #honor #USA #comedian #comedy #movies #films #actor

So sad to hear about @carlreinerig this morning. He made my favorite movies: The Jerk, The One and Only, and Where’s Poppa. His art and achievements are inspiring and vast, but his humanity was beyond compare. His deep love for family and friends, his bestest friend Mel Brooks, his love of laughter and his gestures of care. I never left his house without him giving me something— a book, a space pen, a Swiss Army knife. RIP to a man that embodies the word mensch

To the man I grew up idolizing, got to work with, became friends with and the father of my good pal, Rob. You showed me the true meaning of the word ‘mensch’ and how it was possible to have both a show business career and rich family life. R.I.P. Carl Reiner. #carlreiner

One of the great pleasures of my life was to spend time with my comedy hero Carl Reiner. Here, he is showing me one of his most recent books that he was working on. He was creative to the last minute of his 98 years. Carl believed the secret to long life was creativity, and you can see the best evidence of that in his HBO documentary, If you’re Not in the Obit, Eat Breakfast, streaming now on @hbo @carlreinerig @hbomax #carlreiner